Which is why I have a much higher tolerance than the average person for airports, Walmarts and friends who suck at planning.

Are you groaning? You must be one of those people who excel at spreadsheets, cross-country road trips and planning your social calendar months in advance.

As I write this post, I am sitting in one of the world’s busiest airports. I took a car to get on a bus that took me to a train so I could board a plane. I’ve been run into thus far by a two-foot-tall Disney princess and a man who looked like he was trying to move house via a major airline. I’ve had a piss-poor egg sandwich and mediocre coffee.

Because I love the element of surprise. 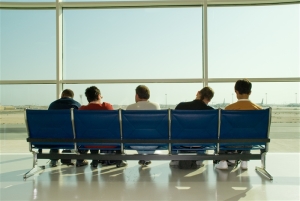 Airports hold promise. The odds of an unexpected encounter in your run-of-the-mill average daily life are decent, if not huge. You might run into your boyfriend of 25 years ago. A former colleague who has since moved to Europe. A celebrity who is just passing through town.

Or, you might just sit next to a fascinating stranger, one who changes your life in the brief hour you fly together.

I love the surprises the melting pot holds.

The couple who looks miserable after an obviously far too long Bahamas vacation together. The wedding is off, from the looks of it.

The family headed to Nashville to visit relatives, with a daughter begging every airline staff member she can find for wings.

The jaded businessmen, traveling in a pack, looking like they could use a lot less coffee and a bit more sleep.

It’s humanity, if not at its finest, at its most diverse.

Which brings me to Walmart. Definitely not humanity at its finest. Park at your own risk. Pass someone in an aisle at the same risk.

I don’t love your typical Walmart customer. I don’t love the messy parking lot and mass-produced items. But I do love not knowing what you will come upon at every turn. Walk toward school supplies and you might just find a great deal on sunscreen. Or, the latest bestseller you’ve been meaning to buy. A kiddie pool for the dog to splash in this summer.

Some of my nearest and dearest find my love of surprises annoying. As I head back to my hometown this weekend, I have reached out to several friends. Most of them, at the eleventh hour. And one has scolded me for not giving her more notice. My former spontaneous college sorority sister has become a planner and wants advance notice when I’m coming in to town. Which is totally understandable, given our busy lives.

But part of me says–doesn’t she know that would completely eliminate the element of surprise? 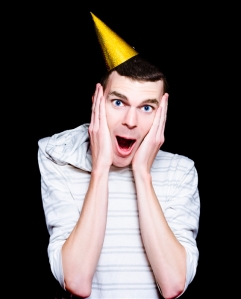 What better feeling than realizing that in the midst of your ho-hum weekend, an old pal is visiting. And suddenly, the weekend brightens.

I love that feeling.

In the same way that I loved walking into the conference room at the law firm I’d worked at through college breaks to find that the entire office was throwing me a going-away party. When they yelled “surprise” and the truth sunk in, I was elated. I was truly surprised, truly grateful and truly had fun.

Some of you will think I’m nuts. And quite possibly, I am. But you ride the roller coaster of life either way, right? Some people scream and fret the whole time.

And some of us put our hands up in the air.

Postscript: After I finished this post and boarded the plane, the airline lost my luggage. It never made it on the plane.

After dealing with rather rude airline employees and two other women who nearly came to fisticuffs over who should claim their lost luggage first (one had a dying mother and the other two screaming children—both felt their need trumped the other), I finally got my suitcase—eight hours after I landed.

I changed in an airport hotel bathroom so I could make it to my event. Broke my expensive perfume bottle. And got hit on by a fellow visitor to the ladies’ room.

Let’s just say it wasn’t my day. The universe was testing my hypothesis. I could just hear it saying, “So, you think you like surprises? Let’s see how these sit with you.”

And yet, I stand by my love of surprise. The surprise of lost luggage? Not so much. The broken perfume bottle? Oy vey.

But the beauty of it all is—if these surprises can happen, then so can more pleasant ones.

Which really should come as no surprise at all.