You will never guess what I concluded after my news review this morning.

The world is not such a horrible place.

Yep, you heard it here. (Earlier in the week, I wrote about my efforts to help improve my corner of it. Seems only right we continue the conversation with much larger endeavors.)

The world is at least not as horrible as consuming news daily would have you believe. In a week where an acronym for an organization I will not mention here was far too prevalent in world news again, bright spots emerged.

We’ve got Bill Gates and fellow billionaires eradicating diseases, challenging the way we teach our children, feeding the hungry. And they’re just the ones that get the press. Plenty of us do this in our own communities. Well, maybe not the eradicating disease part. We usually leave that to the billionaires and brainy science geeks. But the rest of it? I know plenty of people fighting for better education and a warm meal for those less fortunate.

Business is becoming more human. I wish I could say so in my corner of it, where I know a few people whose egos preclude anyone else from fitting into the conference room, let alone getting speaking time on a conference call. But bright lights are beginning to shine.

Aetna’s CEO, a changed man after a near-fatal ski accident, gave his lowest paid workers a 33 percent raise. “It’s not just about paying people, it’s about the whole social compact,” Bertolini told the Journal. “Why can’t private industry step forward and make the innovative decisions on how to do this?”

More than 13,000 Aetna employees have participated in corporate-sponsored yoga and meditation classes Bertolini instituted. According to a New York Times article, the classes are more than just nice to haves: “More than one-quarter of the company’s work force of 50,000 has participated in at least one class, and those who have report, on average, a 28 percent reduction in their stress levels, a 20 percent improvement in sleep quality and a 19 percent reduction in pain. They also become more effective on the job, gaining an average of 62 minutes per week of productivity each, which Aetna estimates is worth $3,000 per employee per year.”

Something tells me Mr. Bertolini sold this to his number crunchers on the basis of increased productivity but his motivation was higher than that.

Just a hunch. Near-fatal ski accidents have a way of changing people’s focus from numbers to quality of life.

Satya Nadella, Microsoft’s CEO, likes to read poetry, something he has admitted publicly. Can you picture a CEO saying this in the shoulder-padded 1980s tough-guy era? Not on your life.

Across the pond, Shakespeare and Company, arguably the world’s most famous independent bookstore, still sits in Paris, facing the Seine. Having housed (literally, many authors have slept there) the likes of Ray Bradbury, Henry Miller and Anaïs Nin, the bookstore has been around since 1948. When its venerable owner died at the age of 98, his daughter officially donned the mantle he had worn, not wanting the store’s legacy to die. She had worked there for years anyway, finding her father’s love of books her own.

The shop serves as an incubator of sorts for young writers, just as it always has.

It’s nice to see a bookstore that has not sold out to luxury developers, despite its prized location. To see that progress sometimes means preservation. And that we’re figuring that out before there is nothing left to preserve. 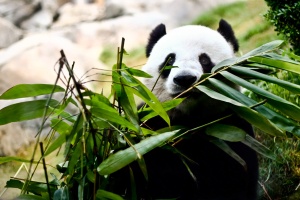 The panda population has grown by 16-17 percent, because of China’s preservation efforts, if reports are to be believed. And tortoises were born on Galapagos Island for the first time in a century.

A 91-year-old is a tech designer at a Silicon Valley firm. She spent two months paring down her resume from nine pages, sending the final version via snail mail. And got the job, fulfilling a dream she has had since age 10 to be an inventor.

Preservation of a totally different sort but just as precious.

And who says CEOs are the only tough guys showing compassion and a softer side? Sheriff’s deputies in Florida saved a birthday party for an autistic boy when none of his classmates showed up. Seeing his mother’s post on Facebook, they pooled money, purchased gifts for the boy and even gave him a helicopter flyover.

Which makes me want to hug them.

I am not Pollyanna. I know that tomorrow, I may be served up more beheadings, hate crimes and economic disaster stories. In fact, I’m fairly sure I will.

But when I see them, I will remember to think about billionaires who do more than sit on yachts, CEOs who help humanize the everyday, bookstores that serve as havens for creative types. I will smile as I think about baby pandas and tortoises in the wild, 91-year-old ladies who show the youngsters a thing or two when it comes to good ideas and an autistic boy who was served up kindness instead of ignorance.

This week, at least, it seems the good guys are winning.