There was no avoiding her, in my mind. She was right there, center stage in my line of vision, put in my path for a reason.

Last night, a friend and I had dinner, then stopped by a local coffee shop. As she went to the counter to get fixings for her coffee, I came face to face with a young woman one table over from ours. Without my friend sitting across from me, I was staring this woman in the face.

She did not notice me; her gaze was down. She was a million miles away, by the looks of it. And not in some warm, beachy vacation spot. In a very dark place.

I hate this look.

Many of us avert our eyes, feeling we’re intruding on someone’s privacy when we catch such an unguarded look.

I no longer can.

Life opened me up a few years ago, like it or not. And now I feel this responsibility to do something with that knowledge, that empathy.

I knew the look on her face so very well. It had settled on my own face numerous times during a particularly hard recent period in my life.

This look belonged to neither of us. It’s universal. I see it now, oh so clearly, on the face of the mother who is driving carpool behind me. After she drops her kids off, she sits at the red light, with the pain on her face almost palpable.

I see it in the face of the cashier at the grocery store, the cab driver, a loved one. 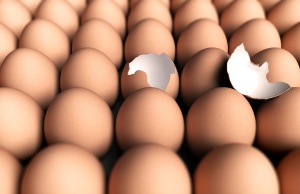 I don’t know if life opening me up with my own pain has made me see with new eyes or if there is just a lot more pain in the world than there used to be. Either way, I see it.

Sometimes, I just offer up a silent prayer. Last night, I could not keep myself from speaking. What I said was innocuous. Had nothing to do with her pain. But it was a human touch to break up the lonely brooding.

“That looks like Heaven,” I said. “Being able to sit in a coffee shop on a Friday night, alone, relaxing with no distractions.”

“I’m just waiting for the train after work,” she explained. “And it does feel good to sit down.”

“All you need is a good book,” I said, smiling.

“You know what? You’re right,” she said, smiling. “I just finished one and think I need another.”

She stayed a while longer and then left. But her look lightened a bit. If nothing else, my interruption of her train of thought had dialed down the intensity.

A harmless exchange. Not earth shattering. Our little conversation might have been an annoyance rather than a balm.

But we don’t know. My mother used to tell me the story of a young nursing student who attended the school Mom ran. This young woman was walking down the hall one night. My mother was working late. Mom sensed something amiss and asked the girl to come into her office for a conversation. She counseled her, I’m sure, as she had her daughters so many times. Thought not much of it.

Years later, this woman sent my mother a letter telling her she was planning on suicide that evening. And the conversation stopped her. Mom had no idea.

She used this with me to remind me often of my impact on the world. When I was thoughtless, or catty, or judgmental, she brought that story out again and again despite my eye rolling.

Now that my vision seems to have been sharpened by my own pain, I feel an obligation. Maybe it’s Mom’s teachings. Maybe it’s God. Maybe it’s just basic humanity.

Whatever it is, it is to be respected. Heeded. Acted upon.

Perhaps it makes up for my general impatience with other drivers, ego, long checkout lines. I’m no saint so when I find something I get right, I’ll run with it.

I’m done with random. People are placed in our path, sometimes front and center for only a few minutes, for a reason. And it may take great pain to recognize great pain.

I intend to use it. To give it a purpose.

I bet I’m not alone.