I am reminded this week that if we have any power at all, it is in this very moment. And as I write that, I realize it sounds like something you’d read on a cocktail napkin at a Tony Robbins seminar. Apologies for that. Mea culpa, but I’m still plunging ahead here.

This post was going to be a virtual holiday coffee klatch, cheery and newsy and bright. I’m not going to wax dark on you, I promise. But, I’ve got to keep it real and the Universe is handing me some serious stuff. As I began a conference call this morning, I glanced at the personal email I had opened moments before joining. I had to read it twice to digest it. The high school classmate I had just instant messaged two days ago—a package addressed to her sits in my office—is dead. She died in her sleep of a sudden heart attack.

After I got over the shock, I immediately went where us Catholics tend to go—guilt. Why didn’t I send the package sooner? As if that matters, right? It was a book for military moms. She had shared with me that her eldest would be joining the military and I was going to share with her a book that really helped and comforted me when my son did the same. She had recently sent me pics of her boys and I planned to enclose a Christmas card showing off mine.

Colette and I weren’t friends in the traditional sense. We knew each other in high school and were friendly, but not close. We reconnected because of this very blog, in fact. She reached out three years ago after reading a post I wrote on the tough time I was going through. She said she would love to chat. And, it appeared she’d kept her sense of humor: “Hi, Kristine! Hope you are well. I just want you to know things will get better! I’m living proof of that! Just hang in there and breathe.  ‘It takes courage to believe the best is yet to come.’ –Robin Roberts. If that doesn’t help, the Power Puff Girls will. They fight crime AND they’re in a band.”

We did speak, finally, a few months later via phone. She shared her story with me—a tough one that involved alcoholism, cancer and a wealth of hurt– but she was trying to live out a better ending. She sent me this:

As she put it: “I’m living in recovery and gratitude.”

In the three-and-a-half years since we reconnected, Colette would reach out every few months to make sure we stayed in touch. She was far better at it than I was. I’d open my social media account to a pic of her boys on their father’s farm in southern Ohio. A thank-you for a box of my old CDs, telling me how much she enjoyed listening to the ‘80s all over again as she canned tomatoes. A photo of her niece playing the bass. After reading this post of mine on common courtesy, she sent me this: “Great article today Kristine! As a Retail Associate I can tell you how many people treat me like crap! My boys have learned the same lessons [you mentioned in your blog]. It’s nice to know when something I said sticks with them. Bravo for your victory—you need to pat yourself on the back.”

After she read my blogs on online dating, she reached out with this: “Hey Kristine! I actually did it . . . I threw my hat into the ring of online dating. Why not. I need an adventure, right? So far, no luck. Hope this will be an interesting summer. LOL.”

The next week, I got: “Do you want to start a business with me? It will be online dating where our friends and family help to pick men out (because I’m not really good at it myself). It would be cool. We could go on Shark Tank. If we didn’t meet anyone, at least we would be rich! It’s all good.”

And the following week: “Look, it’s Santa,” about a man she’d been matched with. Yes, unfortunately he did look like Santa. A couple of months later, after seeing her looking happy on Facebook with someone who was definitely not Santa, I sent: “So, I think you’ve moved beyond Santa? Yes? Met a nice guy?” She responded enthusiastically that she had and was having a lovely time being loved again. While it did not last, I’m now so grateful she had those few months with him because she smiled so much.

I didn’t wisely use my moments while Colette was alive, really. She had asked if we could meet when I visited my hometown, and yet we didn’t. Entirely my fault. I am always in for such a quick visit and have a large family. Many times, I don’t even see my very close friends because of that. But, I feel badly now that I never made even a short coffee happen between us.

Colette’s death hit hard because just days ago, she was alive and texting me her address. And now, she is simply gone. That dichotomy is hard to digest. I wish I’d used the power inherent in each moment to express to her how much I admired her fight for a happy ending. She had ups and downs—and struggled with some demons—but tried hard to stay on the positive side of things.

The last exchange between us was just 10 days ago. And the last thing I sent her was a short sentence asking for her apartment number. Talk about an uninspirational ending. Colette would not have appreciated me ending the blog with that mundane bit. After all, her response included: “Let the Xmas season begin!” So, instead, I’ll leave you with two things she sent me over the past several years to cheer me. She was a real cheerleader for this blog. I think it would make her happy to know that a few of her bits of inspiration might help you today.

The first, for any of you divorced or widowed, is a HuffPost essay about the possibility of a happy ending. Colette believed in those, that I know. And the second is, eerily, somehow her parting advice to me, I think. No–I know it is. She sent it to me in one of our first exchanges, and now I know I’ll hold it dear: 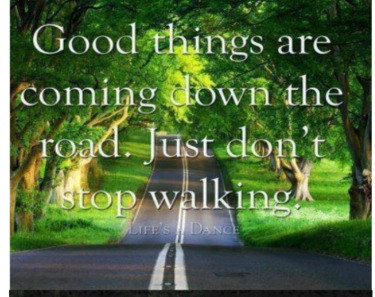 Take it in, friends. And take it from me—use your moments wisely, today. Tell someone something that will make them smile. Hug somebody. And welcome the good things heading your way. Here today, gone tomorrow, really happens. Let’s not forget it as we begin the holiday season Colette was so very excited about.