But this year, I find myself equally as thankful for what I have lost. And I have lost many things that simply no longer matter.

With great loss comes great wisdom, if you ask. If you ask, and ask, and ask. In the middle of the pain. At its start. While it wanes. The wisdom does come. Sometimes it comes even when you don’t ask.

But I asked. Jesus, did I ask.

Part of the wisdom that came to me during the difficult times of the past few years was what no longer matters.

I’m not alone in my epiphanies. Madonna Badger, an advertising exec, lost her daughters and parents in a Christmas fire several years ago. She says it better than I ever could.

I could not help but cry when I saw that interview with her. Not only because her pain was still so raw but because it brought back to me my thoughts as my parents were dying.

Clarity came. When someone you love is dying, you don’t want to lie. At least I didn’t. So I could not speak flowery words about how wonderful my mother had been. She was, in many ways. In others, she was quite harsh. I needed to speak my truth honestly but without sugar coating. I owed her that.

I remember realizing I could thank her. And I did. I told her she had raised me not to doubt my own abilities. To respect my intelligence and talents even when others did not see them or choose to do so. And because of that, I had flown.

She had little to say in response but that did not matter. It was my mother’s way. I had given her the gift of a truth and thanked her for what I could at the time.

I realize, now that she is gone, that what she could not give does not matter so much. It was all part of the plan. What she gave helped me in myriad ways. What she couldn’t give helped to develop who I’ve become. All good, really, in the end. There was only room for love in that hospice room. All of the other emotions tried to swirl around me but the love became so big it left no room for anything else.

As my sisters and I sorted her things, I realized the nice towels she worried so much about (“Don’t use the monogrammed towel set! That’s for guests.”) sat in the closet still. A sad testament to how empty valuing things turns out in the end.

Her worry about what the neighbors would think didn’t matter anymore either. Her children had all grown and none of us had shamed the family so badly we couldn’t recover. She had outlived some of the neighbors anyway.

How many things you have in your closet and what other people think? These are just a few of the things I learned did not matter. 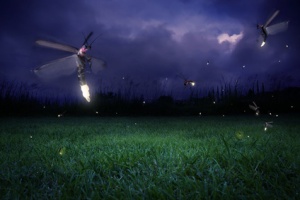 My father’s death made me realize even more. I was slightly older, and far wiser, as I was in the midst of a divorce. It no longer mattered that my father and I did not have a lot of common interests—that I was a bookworm and he was a gardener, that he loved bologna and I couldn’t stand it, that my need for time alone stood in stark contrast to his constantly gregarious nature; it didn’t matter. Only the love remained.  The other concerns, big and small, fell by the wayside like so many scattered fireflies.

I found, as many who are grieving do, that when you come back to your own life—the life that is still yours but feels like someone else’s loaner because of the large hole now in it—you realize the things that don’t matter continue to come to you. The insights do not stop because you’ve now been tempered and are better prepared to accept them.

You might lose friendships because of these insights. And hobbies. Material items. And pretentions.

Say amen to all of it. And then thank you. Thank you to whatever higher power you believe helps you through this crazy life.

I lost the gossipers. Lost the bellyachers. Lost the judgers. Said goodbye to those who have played it safe for so long they could not identify an original thought if they had one.  The disingenuous, the petty, the envious. Not that I ever wanted these in my life to begin with but after great loss, you care less that these people know you’re releasing them with—if not love—then at least no ill will.

You no longer care about their reaction to the letting go because, in the end, it doesn’t matter. All that matters is you following that inner voice, that path, that now appears (however temporarily) to be lit up for you like a runway. And those who do not support and love, those who try to keep you at the gate rather than letting you follow those lights—those people become some of the bits that no longer matter.

That sounds harsh. I know. But sometimes the most loving thing you can do is release with love.

Along with the guest towels, and the hurts, the grudges, the fears, you release all that is not working with you toward your highest good. You release it with love and wish it the best—thanking it for its duty to you and the lessons it brought. And then your focus shifts with renewed strength to that runway, providing you opportunity to explore a new path.