My mother, God love her, departed this world in 2011 leaving behind six daughters, a dozen grandchildren and a few great grandchildren—all a loving testament to who she was.

I have no quarrel with these leave-behinds. In fact, I call them family.

But, recently, as I gazed at a photo of two friends and I walking arm in arm—one that was taken from behind us, might I add—I realized Mom had left behind something I never asked her for and have no intention of keeping.

She would throttle me for saying that. The picture of couth, she would much prefer bottom, rear end, bum. Anything but ass. Sorry, Mom. Journalists just tend to tell it like it is.

As I gazed at said photo, which was texted to me, I believe I texted my friends something brilliant along the lines of: “What is my mother’s ass doing on my body?”

Don’t judge. It was late, people.

None of them answered me, which is sure confirmation for me that I am correct in my assessment of my hind quarters. Or, they just did not want to discuss asses after midnight, preferring to go to bed. Which is why they are my friends—an oh so sensible lot.

Regardless of response or a lack thereof, there was no mistaking that curve in the photo. I knew exactly who was behind it, gene-wise. 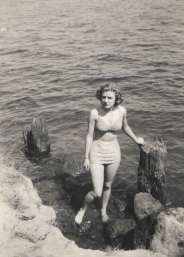 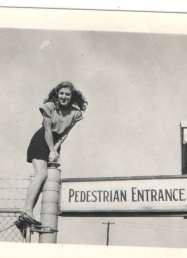 Don’t get me wrong. My mother, in her day, was a catch. A pretty and intelligent cheerleader, a Navy nurse during WWII, she had her share of suitors. But, as she became an executive and had children—and sat at a desk much of the day—her shape changed.

Did I mention I work at my computer for hours and hours each day?

Ah, now you’re starting to get the picture, without having to look at the actual picture I was texted—and don’t ask for it. I won’t show it to you. My friends will have to go into the witness protection program if they show it to you.

Had my mother decided to share the wealth amongst her six daughters—leaving each of us only our rightful fraction of her ass—I would have no quarrel. After all, it wasn’t unattractive. Divide it by six and it would give us each just a bit of junk in our trunk. Instead, I seem to be carrying the full load of luggage. (And truthfully, I would not dare to mention if my sisters are. I may share in this blog but will be sharing a dinner table with them this weekend. No need to start war games–I am the youngest and smallest by far, and outnumbered.)

Yep. Me and JLo with the rear baggage. Except hers gets worked out by a very wealthy trainer on a daily basis.

Your smarts, Mom, I am happy to carry on. Your public speaking abilities? Absolutely. Your pretty feet, beautiful nails—yep. I’m even willing to accept my somewhat Germanic nose, albeit grudgingly.

But I draw the line at rear quarters of any kind. I have enough of my own—I do not need yours tacked on for good measure.

It is clearly time to clear some junk out of my trunk.

I think my mother will be chuckling as she watches, considering it payback for my sassy years. Here’s to taming glutes the way my mother tried to tame me–and here’s to a at least a modicum of success before the next bathing suit season hits.