Like any good mother, I know my son. I can usually predict, with about 80 percent accuracy, his next move.

And like any good mother, I want him to best me.

But they may have other ideas. Besting us may not be one of them. Learning from our mistakes rather than making their own is definitely not one of them.

Forging their own path? Yeah, bingo.

For instance, as a parent, my child’s grade point average matters to me. I want him to work hard so he has many college choices and multiple doors open to him later in life.

He wants to have fun, experiment with his schedule and meet cute girls.

What’s the phrase—and never the twain shall meet? Living it.

As we discuss his upcoming freshman-year schedule, I ask which language he is planning to take. And out of his mouth comes: “German.” 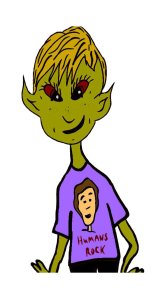 I try to discern why the boy who dons a surgical mask so he doesn’t have to smell sauerkraut wants to learn German. Why the boy who has already begun to learn French and likes things easy wants to take the hardest language offered at his high school. When I ask, he says, “I want to visit Germany some day and it would be nice to be able to speak the language.”

Which planet are you from, alien boy, and what have you done with my son?

There is no sense protesting. You’ve given yourself away. My son does not bathe twice per day. Oh no. My son still forgets to put on deodorant. You emerging from the bathroom in a haze of Axe body spray is a sure giveaway. As if all of this cleanliness was not enough to reveal you as in imposter.

The other freshman elective my oldest wants to take is not the architectural drafting I am sure he will choose, and in my mind should choose, because of his talent in this area. Oh no. Not that class.

As I try to calmly digest this one, I am silently thinking this might be a good thing because cooking is something every young male should learn—and he is not crazy about learning it from me right now. I am thinking this might just be some very practical forethought on his part and a sign of his budding maturity.

But when I ask him why this particular elective, he says, “It’s really cool, Mom, because you get to eat whatever you make during school. It’s like having a second lunch during your day.”

Ah, there’s the boy I know and love. Perhaps no alien abduction at play.

Just an adolescent, beginning his journey to differentiate himself from—gulp—me.

As I begin the tightrope walk—alternating between covering my own mouth or sitting on my hands, and advising in a manner that hopefully doesn’t sound like I’m chipping away at his newfound independence, I realize I have four short years with this boy. Before he really begins his solo journey in earnest.

We have a lot to do before my son ends up making strudel in Cologne while chatting fluently with his pals. I can just hear him now, saying, “Thank God I didn’t listen to my mother and take drafting and French. Otherwise, we wouldn’t be enjoying my culinary masterpiece while chatting in flawless German.”

But hey, I’m only human. I am hoping he adds: “What do you think of the new museum I just designed? Blueprints took me forever. It’s just over there, across the river.”

Perhaps I can live with this journey. And enjoy watching him take it, as I continue my own.

I am rather fond of Riesling and strudel, after all.