I’ve heard this said mainly as a battle cry, when one of our US political parties wants their candidate reelected for president.

I say it now as a mother’s battle cry, in disbelief, as I realize how much precious time we’ve logged as a family. And how little is left.

I dropped my eighth-grade son off at his soon-to-be high school a few weeks ago. He was participating in a brief orientation, given by some upper classmen. As I watched him walk through the door of this massive building, a lump formed in my throat.

He’s so small, God. Just barely my height, if that. Not even 100 pounds yet. Braces on, along with his tough-guy, I-can-handle-this face. 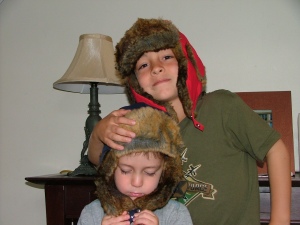 And I flashed back to the first day of kindergarten. There he was, sans braces, but with the same tough-guy, I-can-handle-this face on. While most of the other children were hugging their mothers, waving and/or wailing at the separation, he was businesslike.

“Please don’t embarrass me in front of my new friends by kissing me, Mom.”

Equally as businesslike this morning, eight years later, he coolly steps out of the car with nary a backward look.

And it hits me. Four more years.

That’s all we have left before I “launch” him into the world.

What an apt word. Launch. Because it feels as if I’m going to catapult him into a vast crevasse of God-knows-what. Is this how an astronaut’s mother feels? Egad.

I look at the senior waltzing into school, a full head taller than my son, sure he owns the place. No pimples, no braces, no trace of little boy left in him. And I think—in just four years, this is what I will be looking at. There will be big man feet hanging over the end of the bed. Razors and large jock straps strewn across the boys’ bathroom.

We have less than 600 family dinners left together if I count up the nights I, rather than my ex, have my son.

Can I get him to eat quinoa, summer squash and chicken in those four years? To start to take vitamins, get a full night’s rest and consistently offer a firm handshake to those he meets? Learn how to sew a button, properly wipe off a kitchen counter and be more thoughtful? And the pièce de résistance, to throw the empty orange juice container in the garbage rather than put it back on the refrigerator shelf?

Can I offer him my example, hoping he sees that the every-man-for-himself mentality he may see modeled by others is not the best way to live? That my volunteering and donations to charity are not silly but part of leaving the world better than you found it?

Can I parent in a kinder, gentler way when he screws up? Can I learn to not nitpick at his grammar, posture and attitude? Can I just enjoy the person he is becoming rather than worry about every little motherly thing?

He is the jokester in our house. My (sometimes begrudging) heavy lifter. The one who wants to chat and chat and chat sometimes. Sit and brood other times. He borrows my coat to walk the dog and then, when I’m out and about, I wonder why I have a package of instant oatmeal in my pocket. He tsks at me when I don’t properly organize my grocery cart, rearranging things with a resigned look, I’m sure wondering how I survived before he came along.

And I can’t imagine my days without him being a constant.

If I’ve learned one thing over the past several years, it’s that an end to an era is always coming. Be it the end to being your parents’ daughter, an end to a marriage you thought was forever, the prospect that a loved one may not be here in a year’s time.  And even when you get fair warning, it hurts. But it makes no sense to piss away the present by bemoaning future pain. All we have is now.

And right now, I have two still rather small boys asleep on my sofa with one not so small black Labrador retriever. They sleep, in a large “L” shape, with Bailey in the corner, connecting them. My little one has his feet wrapped around his older brother’s head, and Bailey has a paw on each of them. I cannot imagine it not being this way and yet, there will come a day when a piece of that L will be somewhere else, miles away, hopefully not sleeping through class or cleaning up after a keg party.

So I will gaze upon my boys a little longer, relishing the fact that I still feed, clothe and nurture them. That I enjoy their company each and every day. That even in my tear-out-my-hair moments, I love our life together.

Four more years is not just a battle cry. It’s a privilege. If you don’t believe me, ask the mother of that 6’2” senior waltzing nonchalantly through the school doors as the bell rings. Because I think I caught her wistful look as she pulled away in front of me. It was not so very different from mine.

Kelly Corrigan, author of Glitter and Glue, puts it beautifully in this video. Katrina Kenison, author of The Gift of an Ordinary Day, puts it best when reading an excerpt. Spoiler alert: you’ll need tissues and about five minutes. It’s worth it.