The cavalry is not coming.

But when overwhelmed by a situation that is chronic, tiresome, emotionally exhausting, we look for rescue.

Please, anyone but me, we beg.

We wish for someone else to take over. Take the hit. Fight the good fight. Bring home the bacon. Face the mess. You fill in the blank.

I’ve seen it and lived it.

The career woman who burns out and wants to be financially supported so she can stop going to the job she hates, doing soul-sucking work. Who marries the first feasible financial wizard to come along. Only the financial wizard turns out to have money woes. And she lives the rest of her life miserable because of them.

The forty-something who marries in desperation because she fears she never will. She meets not Mr. Right but Mr. I Can Take Care of You–devil-may-care, wealthy and eligible. She marries before she ages any further and spends the rest of her life spending his money to maintain the look he married. He is rarely home and rarely listens. Travels a lot. But she—well, she is “rescued.” Unless he decides he wants a younger model.

The widowed father who marries too quickly so his children have a mother.

The married woman who does not leave her miserable union because she will not be able to support herself in the style to which she has become accustomed. 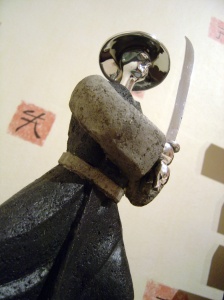 None of these scenarios is fictional. I have seen them all play out. The ringside seat is sometimes uncomfortable.

Many times– I’d venture to say most of the time–our rescuer turns out to be our jailor.

At least, it appears that way. We did this to ourselves, though. We know that, deep down.

No one else solves our problems for us. They may appear to be a temporary fix but whatever brought those problems to our doorstep does not just go away. It reappears again and again, until we pick up our sword and fight. Until we hack our way through whatever internal mess—emotional or otherwise—led us to this unwise and scary place.

So, to those of you who have stored your sword in the closet—maybe a little spring cleaning is in order.

There is no cavalry in the world who can face the battle meant for you and you alone. Only you can do that.