You’ve not heard of them? Are you kidding me? Despite the fact that I just seconds ago became one of the Enlightened Ones, I hereby proclaim you so very Yesterday. 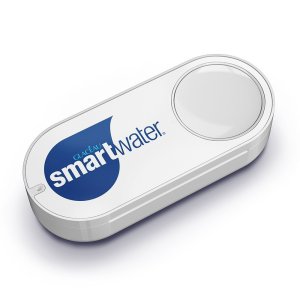 Get with it, Bubbie.

Dash buttons can be placed around your home, near or on items you use frequently. Push the Dash button you’ve placed on your coffeemaker when you are close to running out of coffee and Amazon will send you coffee. Ditto with your laundry detergent, soft drinks, etc. Be judicious; each button costs you US$5 to order.

Where were Dash buttons when my kids were young? At 3 a.m., when I realize I’m using one of the last disposable diapers. During play group, when Horrible Little Harry again got into my snack drawer and devoured all the fruit bits while his mother was busy ignoring him.

I’m picturing the possibilities for expansion.

A Dash button for the harried young parents whose child has been banned from yet another play group (shades of Horrible Little Harry). With a simple push of the Dash, Supernanny is flown in via drone and lands at the doorstep just in time to prevent another dinnertime meltdown. Better yet, how about a hot manny with a fetching Australian accent?

A Dash we can place on our teen’s forehead when yet another complex math problem stumps the entire family. Click the button and order up your very own Stanford or MIT math tutor, replete with a glowing recommendation for your pubescent angel as he applies for the class of 2022. Perhaps go to the root of the problem and replace the math teacher via Dash button with a model that makes house calls.

We could really get into this, couldn’t we? A Dash button to replace the personal trainer who becomes a bit grating over time. The boyfriend who forgets anniversaries. The neighbor who likes to mow the lawn at 6 a.m.

I’m picturing a large, Big Brotherish mechanical claw, similar to the arcade game model, descending from the sky and plucking unassuming types from their daily habitat at will. Drones zooming from house to house, school to school, office to office, delivering a bevy of replacement people and goods.

It gives an entirely new definition to “mad dash.”